“I have an assignment for you!” Prof. Shyama V. Ramani of UNU-MERIT said. “You are going to visit a typical Indian village – a representative village in a developing country. Immerse yourself. Observe carefully. At the end of your visit, tell me your opinion on why the state of sanitation and hygiene is the way it is. Take as many photographs as you can, even of toilets. They can serve as photographic evidence for our research.”

As we drove to the village of Chhipadi in the state of Gujarat, India, one hour away from Ahmedabad, the sixth largest city in India, I was pensive: “How do you invite yourself into a stranger’s home and ask if you can take a photograph of their toilet? Would that work in the Netherlands?”

Our small group consisted of two representatives of two related NGOs focusing on sanitation and waste management issues, Mr. Rangi of FINISH Society India and Ms. Alix Reichenecker, a researcher at WASTE; Ms. Praachi Kumar, WASH researcher at UNU-MERIT; and myself, communications officer at UNU-MERIT. Mr. Rangi was leading the visit, as he knew the village well after having recently supervised the installation of wash basins in the public secondary high school on behalf of FINISH Society India.

Defining Chhipadi as a village may seem a bit misleading. Indeed, the inhabited area immediately struck us as being much larger than the usual European village. According to information found online, Chhipadi counts a population of 15,500 inhabitants representing a little over 3,000 households. Children form a large part of the population, with 12,8% of them between the ages of 0 and 6.

Our visit took place soon after Diwali, the festival of lights, celebrated all over India with great enjoyment. This meant that schools were closed and most children were at home, except those taking special classes or vocational training lessons.

As we started off our tour, two young men enthusiastically volunteered to accompany us and started answering our questions about life in the village. One of them worked as an English teacher in the neighbouring town and the other one was a student in engineering in Ahmedabad. The English teacher seemed especially pleased to practise his language skills.

What systematically struck me during our tour, which lasted a few hours, was the enormous contrast in cleanliness between public and private spaces. The streets surrounding the village and the open spaces inside it were covered with litter. Yet, the main shopping street, the shops, the private homes, the classrooms and the Hindu temple were clean and well kept.

The same observation applied to the state of the toilets. The public toilets at the government office and at the public school were in appalling condition, in total contrast with the two private toilets we were able to see, one inside a family household and another one outdoors, which were perfectly clean. The rudimentary toilet in the private vocational tailor’s school was also clean.

The people we met and spoke to along the way were friendly and welcoming. A middle-aged woman who was heating water in the street to wash her dishes kindly invited us for a cup of tea inside her small home. Her kitchen and all her pans were spick and span and she had a warm smile on her face as she started boiling some milk tea with freshly ground ginger. That cup of tea turned out to be the tastiest masala tea of my entire week in India.

The woman was open and hospitable and did not mind answering our questions. She told us that each household in the village was entitled to a daily supply of 30 minutes of water. When we asked her if she recycled the water, she said that she did not. There was a modest shop in the front side of the house, where her husband sold mainly cleaning products such as soaps, shampoos, and detergents. After taking several pictures with her family of five, we overcame our shyness and embarrassment and asked her if we could see and take photographs of their toilet and shower facilities.

Again, with a proud smile, she showed us the spotless spaces, which looked as if they had already been cleaned that day.

As we continued our walk through the village, we saw a woman washing dishes on the ground near one of the three big water towers. Another woman crouching next to her was sweeping the dirt and the litter around them, as if she wanted to create a circle of cleanliness around them.

“Is open defecation a bad thing?” 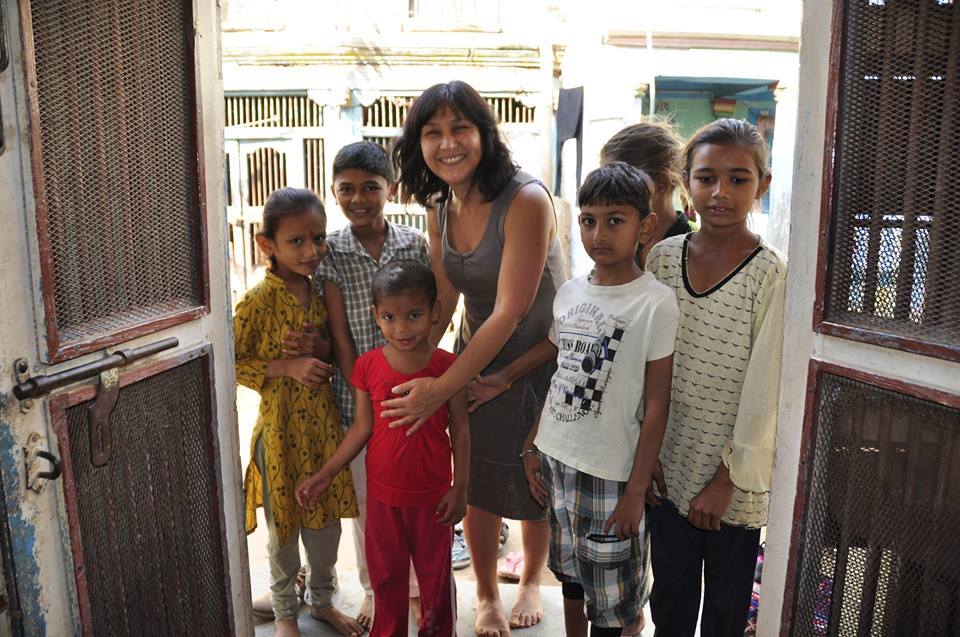 A little later, we arrived at the secondary public high school of Chhipadi. We were invited to join a classroom and say a few words about sanitation practices in our respective countries. Alix demonstrated the six-step hand-washing method. The teacher and the students listened with their full attention. The boys and girls were seated separately on each side of the room and they all looked neat and tidy. Their schoolbooks and notebooks were impeccable.

When we asked them about toilet practices in India, Praachi said something that provoked a reaction of uneasiness and confusion in the classroom. She asked the students to raise their hands if they thought that “open defecation was a bad thing”. Many students did not seem to know how to deal with that question. They seemed to be caught in a dilemma. Were they supposed to give the answer that they thought we expected, and by doing so, condemn a behaviour that they perhaps also practised? Eventually they all raised their hands with uneasy smiles…

The teacher and the students became more vocal when we asked them about the toilet facilities in their school. They had many grievances. They said that the school’s toilets were inadequate and that there were too few toilet facilities in relation to the number of school children. They also complained that the toilets were run down or broken, ill maintained, dirty, smelly, and did not offer any form of privacy.

When we saw the dreadful toilets with our own eyes, we understood what the students meant. No wonder that open defecation could appear as a cleaner and more private solution!

Our minds were bustling with questions: How could the same people be able to keep their own houses so clean and yet accept the streets around their village to be so dirty? How could the local authorities justify the lack of waste management in the village? How could the school leaders and parents endure sending their children to a school where no one could possibly use the filthy and degraded toilets?

When we would ask some of these questions out loud, the villagers nodded uneasily with a half-smile, but stayed silent. They did not seem to know what to say nor did they seem to want to discuss them.

When we reported back to Prof. Ramani, I ventured an explanation: “The people we met obviously cared about cleanliness and knew how to keep a place clean. They even demonstrated a lot of pride in it. That was clearly not the issue. However, they only seemed to care for the places they felt responsible for. They did not seem to mind the bad management of public spaces and public facilities in the village. It was as if they considered this responsibility beyond their scope of action.”

Everyone agreed with my hypothesis. But it opened a larger question: How to build pride in caring about the state of community goods? How to build civic pride?

Got answers to Sueli‘s last questions?

Let’s hear from you!